The EcoFire (Economic Cost of Fire) model is designed to estimate the economic losses to sustainable logging of native forests in the Amazon.

For the fire component, EcoFire uses simulated burnt areas from FISC-Amazon, the regionwide version of FISC (Fire Ignition, Spread, and Carbon Component) [4], which is in turn influenced by deforestation and hence forest fragmentation simulated using OTIMIZAGRO [5], a land-use change model. Here we estimate the economic impact of forest fires that would occur between 2002 and 2041 on the 30-year cycle of simulated timber production (2012 and 2041). Our estimates assume that losses due to fire last more than a decade (≈15 years). The following subsections provide an outline of SimMadeira+, FISC-Amazon, and OTIMIZAGRO that together with EcoFire compose our valuation platform. 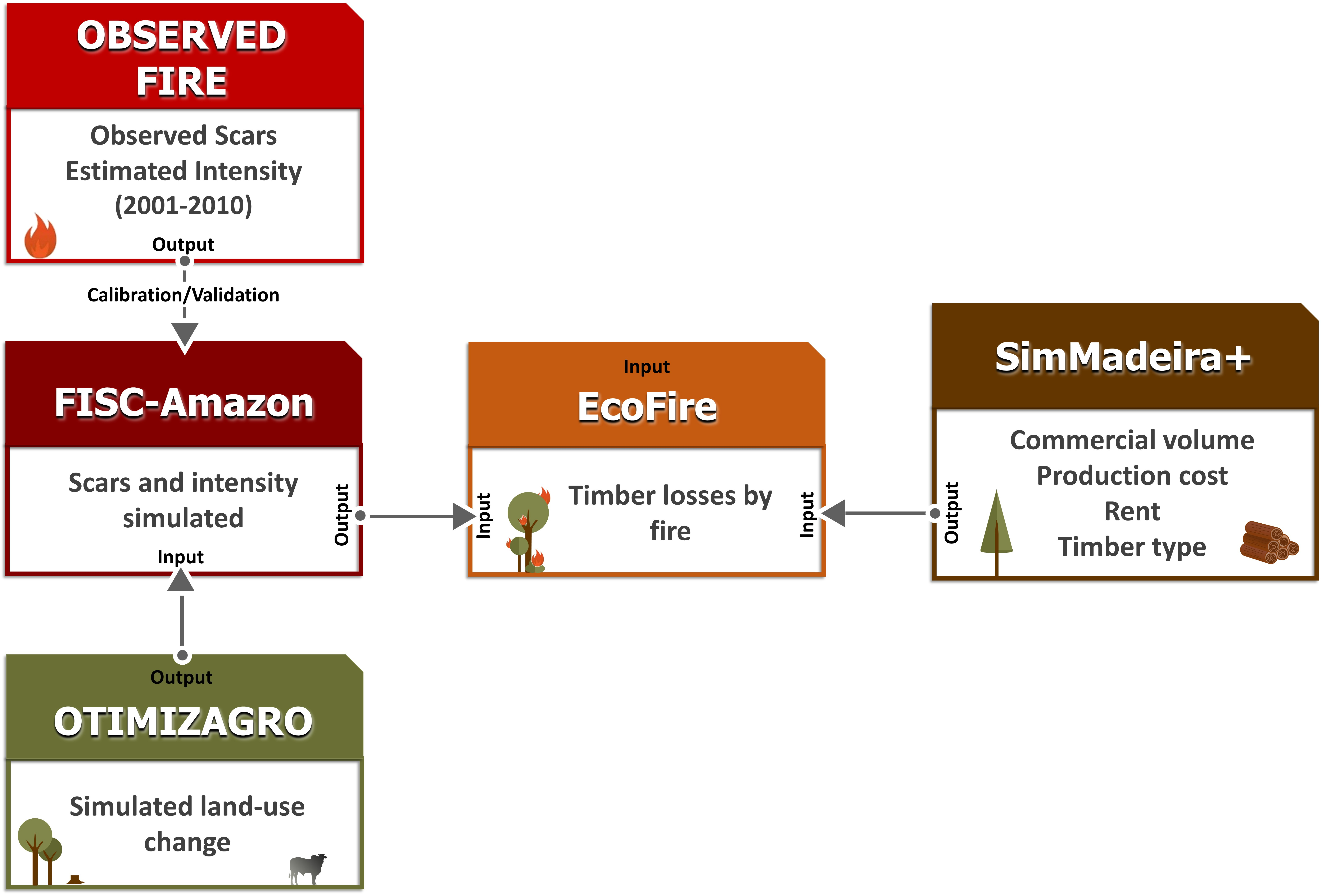 2. Economic losses by fire in the sustainable timber production

EcoFire combines fire and timber exploitation data to calculate losses to rents of sustainable timber production. The model accounts for both effective losses―i.e. losses in simulated burned areas that eventually end up being logged―and potential losses as if all burned areas would be logged in the near future. To this end, EcoFire uses as inputs simulated fire scars from FISC-Amazon and rents output from SimMadeira+ differentiated per hard and softwoods (in both scenarios of current and inflated timber prices). EcoFire calculates economic losses based on a set of heuristics derived from fieldwork interviews in Sinop region, Mato Grosso state. According to informants, three major factors affect economic losses by fire to sustainable time exploitation: 1) fire intensity, 2) fire recurrence, and 3) timber (soft and hardwood) resistance to fire. 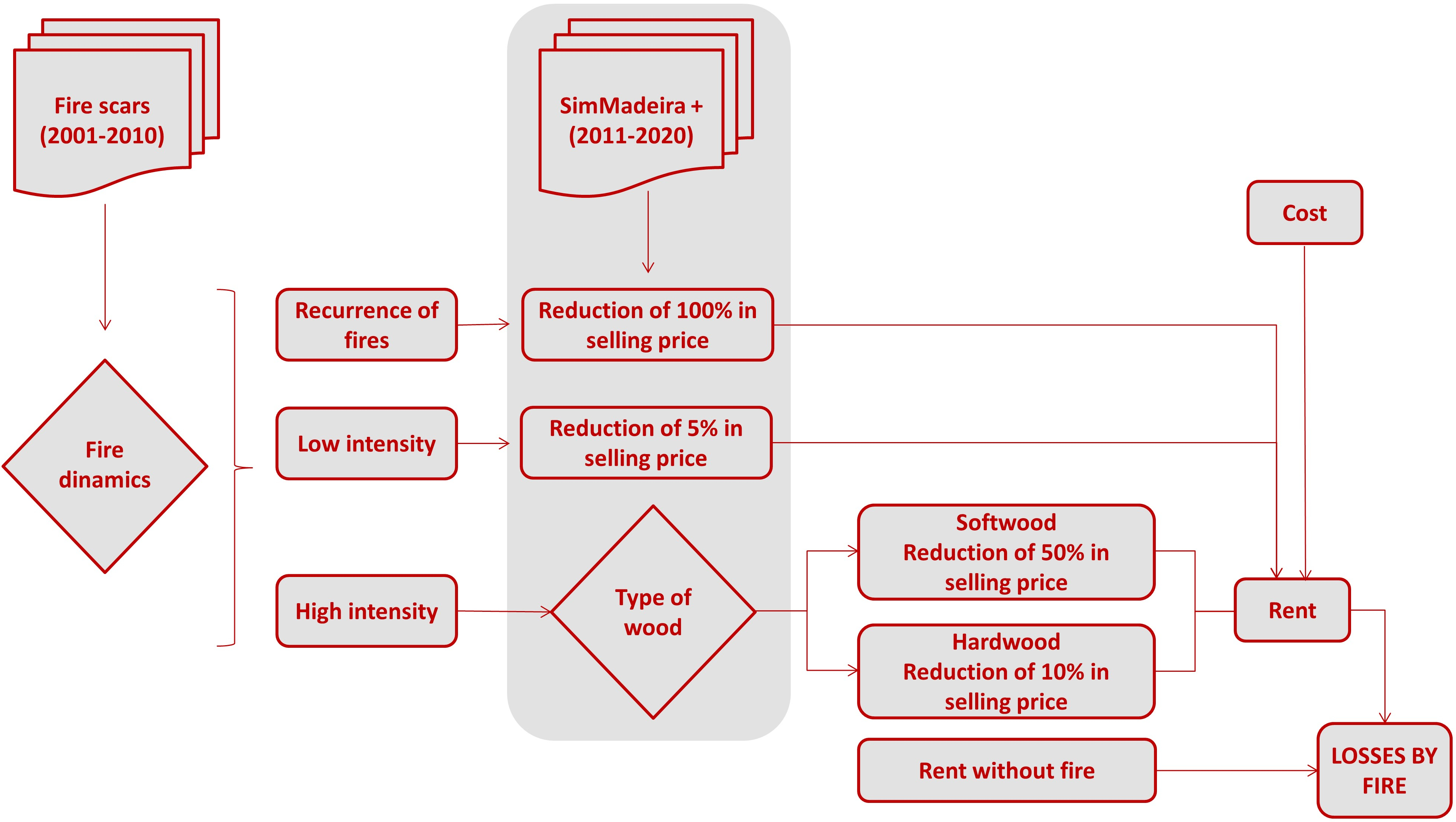 We calculated the economic losses by fire by considering the simulated burnt areas between 2002 and 2041, because timber harvest is forbidden from areas that were affected by fire more than once within a period of 10 years. To this end, SimMadeira+ first calculates the EAA of sustainable timber production in the absence of fire for the period 2012-2041 (logging cycle of 30 years) under the scenarios of current and inflated prices. EcoFire then calculates based on heuristics what would be the economic impact of fire on each cell location, taking into account the temporality of fire events in relation to the harvest year. Since the economic impact varies according to the type of fire, we used yearly fire intensity maps to estimate the presence of high intensity fires―fire events with intensity equal or greater than 400 kWm-1 are classified as high intensity fires. The result is a geographically differentiated estimate of the economic impact of 40 year of fires on a timber production cycle of 30 years. 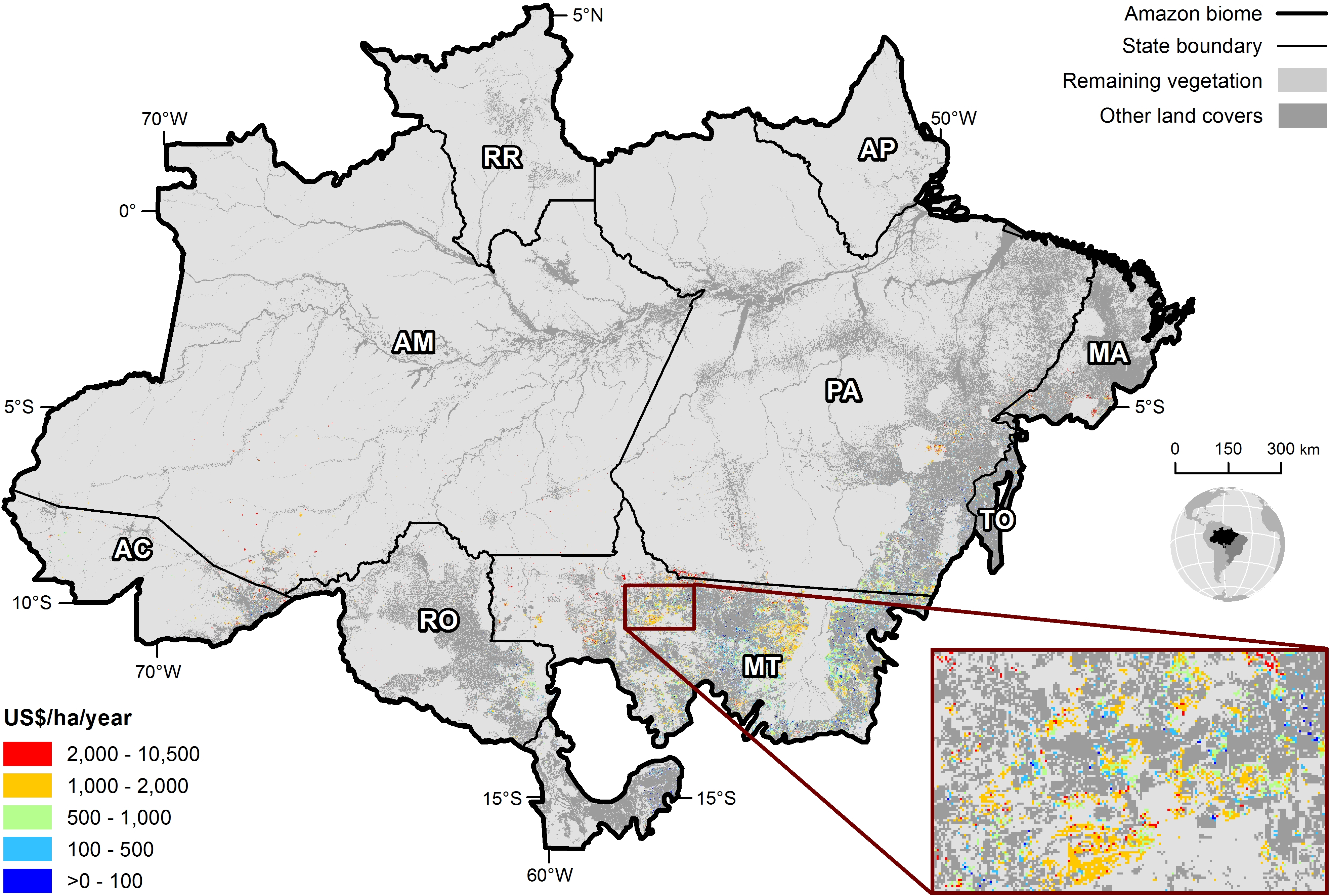